Herds with flat calving profiles producing over 9,500 liters per cow per year achieved a positive net margin of £145 per cow in 2018/19.

Over the same period, herds calving all year round (AYR) producing less than 9,500 liters suffered a loss of £125 per cow. And those with more irregular calving patterns or not calving in a tight block lost £65 per cow.

Herds calving en bloc in autumn and spring achieved the highest overall net margin, between £260 and £290 per cow

The figures were calculated after we re-examined our Dairy Performance Results report to explore the full economic costs for herds previously classified as Year-Round Calving (AYR). The diverse nature of these herds can make it difficult to assess the performance of this system.

The herds were divided into three groups:

Analysis showed that high yielding AYR herds with really flat calving profiles and block calvings had larger net margins on average, compared to other systems that fall somewhere in between.

Download the complete technical and financial performances of these groups

Why do high yield AYRs and block calving systems tend to perform better?

AYR calving tends to incur higher costs than block calving, so sufficient production is required to cover these costs and provide a positive net margin – our high yield AYR calving group averages around 10,500 liters per cow and per year.

These differences are illustrated by the yields and costs per cow in the table below. Herds that do not consciously focus on their strategy may find that they rack up the larger calving expenses of AYR, but fail to achieve sufficient returns to cover those costs. 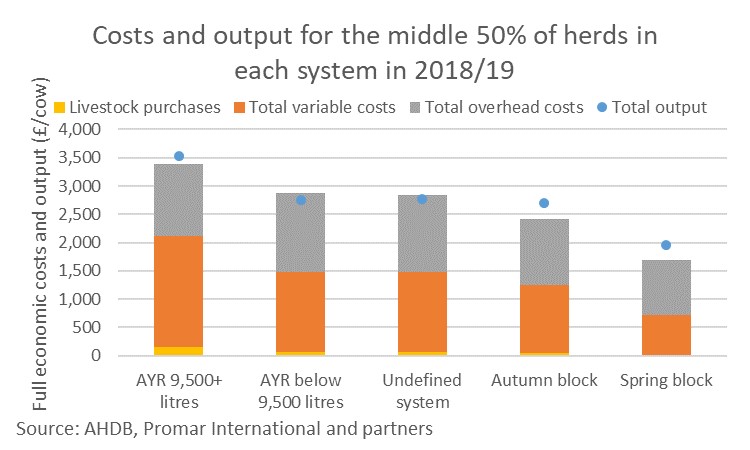 Is high yield AYR or block calving the magic bullet for a better net margin?

No, it’s not that simple. The numbers presented here are averages for each group – when we look at individual herd data, we always see herds calving in blocks and high yielding AYR herds in the bottom 25% in terms of profit. Some low yielding AYR herds with bumpy calving profiles also hit the top 25%.

Any production system can make or lose money, depending on how well it works. The most profitable herds ensure that their system suits their individual operation, their workforce and the market to which their milk is sold, in order to get an efficient return from the inputs available.

See how your herd compares to technical and financial performance

Please note that you may see slightly different definitions for these systems used elsewhere in the AHDB analysis. While aiming for consistency, differences in source data may mean that we need to adjust definitions slightly.