Intel’s next-generation “Intel 4” process is on track to enter volume production in 2H 2022, according to the latest information from DigiTimes.

The site reports that “Intel 4, officially known as Intel’s 7nm Process, is on track to prepare for volume production in the second half of 2022, according to the chip vendor“. Intel has been lagging behind in its process node for years, but has been slowly catching up…Intel Process Node 4 is a renamed Intel 7nm node, just so you know.

Intel will use 3 main tiles on Intel’s next-generation Meteor Lake processors: the I/O tile, the SoC tile, and the Compute tile. Intel’s compute tile on 14th Gen Core processors will contain both the CPU + GPU tile, with the CPU tile using the new hybrid core design – delivering higher performance at lower powers, while the GPU tile is really something else. 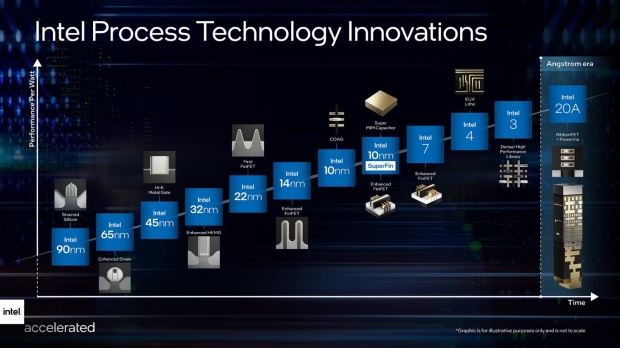 Just a few months ago, in April 2022, Intel CEO Pat Gelsinger announced that its next-generation Meteor Lake processors were hitting the boot milestone in operating systems and a web browser. Gelsinger said, “Intel 4 Meteor Lake has now successfully booted Windows, Chrome, and Linux. The speed at which the team was able to complete this milestone is a significant sign of the health of Meteor Lake and our Intel 4 process technology.”

Meteor Lake will pack to double the Graphics Execution Units of Alder Lake / Raptor Lake CPUs (96 vs 192), which means we can expect major GPU performance improvements with the 14th Gen “Meteor Lake” CPUs in 2023. As for power consumption, we’re looking at 5W to 125W depending on the number of cores – which will be between low-end laptops, up to high-end desktop processors – and we all can’t wait.